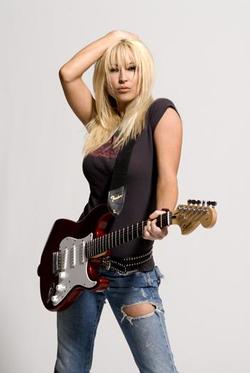 
Don’t let the looks fool you. Sure, Amanda Henkel is gorgeous, attractive for all the right reasons – a snow storm smile, a face you’d expect to see looking out from Vogue, but for this former Hawaiian Tropic model there’s only one ambition and it’s not to pout and strut global catwalks. She’s been there done that. As she hits the shelves with her five track extended play, the immediate comparisons are a glamorous Angelina Jolie meets Jessica Simpson.
But while the focus might at first glance be with the looks, this mother of two young twin boys is keen to unwrap the package and reveal her passion and major creativity rests in country music.
However, while we ponder comparisons, Henkel is no Anita Cochran or Miranda Lambert. Her voice and song choice preclude the similarities, but she’s also not a stunner riding the glamour bus, hoping for an easy chart arrival because of a generous gene pool. She has done the hard yards, scouting home state Louisiana with her sister in a band called Lil Sis . With the apprenticeship nearly served, it’s time for the songstress from Slidell to make it on her own terms.
If you like your music pop etched and country tinged, this self-titled release, out on Desire Street Records, is for you. The album opens with the harmony soaked tale of losing at the love game and the hardship that follows, “Climbing Up Mt.Everest”. Produced by Csaba Petocz, the track, indeed the album, has enough twang going for it to be a country album –but only just. When Henkel gathers speed, gains more radio play, and keenly and clearly defines her path, she has enough to deliver a more country-focused album. However, until then, this mini album is an entrée to the possibilities.
A real surprise to the album, and maybe to the howls of those who like this version, is “Break My Stride”. I was disappointed. The Matthew Wilder top ten hit from 1984 is so out of place here. The passage of time may have dulled some senses, but to older listeners –yes, like me – the track comes quickly remembered, and that’s half the problem. When you re-record a popular karaoke tune, the danger always lies in comparisons with the original. Without staying on it too long, to my ears this was a bad song choice, especially for such an important debut.
Anyhow…
Musical redemption, of sorts, comes with “No Easy Way Out”. Penned by Wade Kirby, Liz Rose and Kim Tribble, the tune is an easy and melodic ballad. It pines its way around hearts and distance, while Henkel’s phrasing and tender working makes the song, not strictly country but close enough, a signpost to her vocal talents.
The album rounds out with “Can’t Trust The Weatherman”. The tune, fiddle rich and drum pounded, is a tale of a marriage made on the run and repented in leisure. As the spoils of a bank robbery staged in sunshine are later lost and flung when a hurricane hits, the message is simple: you just can’t trust the weatherman.