Daniel Lee Martin - All That I Am 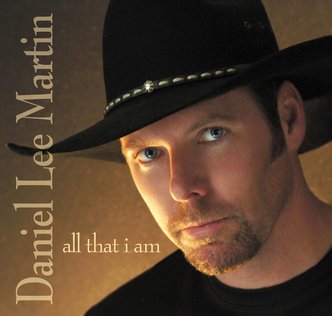 One of my friends, who works within the music industry, has been singing the praises of Daniel Lee Martin for almost as long as I've known her. At the 1998 Fan Fair, in Nashville, she dragged me to his booth and insisted that I meet the person that she predicted was going to be "a country music superstar some day."

He was most assuredly a long, tall, albeit extremely refreshing, drink of water. Charming, handsome and diligent in his efforts to make it in the industry. As I recall, besides being a great singer, he was his own manager/publicist, songwriter and photographer/producer. Unfortunately, the industry has always been reluctant to embrace self-produced talent -- no matter how good they might be. But it appears that others have now discovered what my friend saw in Martin years ago. The first song to be released from his new album, "Homespun Love," hit the airwaves at the end of September and the album will be released at the end of October on the new label, ChinMusic Records.

The first two songs on the album are up-tempo. "Come Back To The Way It Was" sounds like a Montgomery Gentry tune and the second song, "Homespun Love," written by Keith Urban and Vernon Rust, clearly reflects the Urban sound ... this isn't to say they aren't good. They definitely are good, just not unique.

But just when I started to think that this album wasn't going to be all that special, the third song began to play -- "I Can't Let Go;" written by Martin. He refers to this beautiful ballad as a "soul write" and you will clearly understand what he means once you have listened to the song in its entirety. His bio states that the song was originally written to purge the pain he was feeling when he lost his father, but as his spirit healed the song came to have greater meaning for him. I'm certain it will have "greater meaning" for everyone who hears it.

I think there is something for everybody on this album. All of the songs are lyrically and musically strong. Four of the songs were written by Keith Urban so their quality came as no surprise, but after reading over the liner notes I was surprised to find that all of my favorites songs on this album were written by Martin. It was his voice that got my attention on "Until You," a simple love song that is clearly sung from the heart. And despite the wonderful instrumentals on the toe-tappin', "Purely Speculation," it was the cadence of his voice, once again, that effortlessly conveyed the lyrics and enhanced the music.

The final song on the album, "A Guitar With No Strings," is a superbly written ballad by Martin and, in my opinion, one of the most beautiful songs I have ever heard. A poignant tribute to his late father, this is a song that will manage to touch everyone who hears it.

Well, Mr. Martin, I haven't been able to quit replaying "A Guitar With No Strings" over and over in my mind despite the fact that the CD player has been off for more than an hour now and you sure managed to touch my friend Helen P. all those years ago. Perhaps she was right when she predicted that you just might be "a country music superstar some day." After listening to the thirteen songs on your new album, I'm certainly inclined to agree with her and I think "some day" might be at hand.