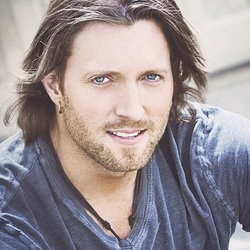 There are some very pleasant surprises on Then Came The Night. Despite being a relative newcomer to music city, Steiner managed to round up some big Nashville guns to contribute to his debut album. Although this may prove to be a shrewd marketing and promotional strategy, I doubt it was necessary since I am sure that Steiner would have had no trouble roping in success on his talent alone.

Randy Travis lent his voice to "I Don't Need Another Reason." This was, hands down, my favorite song on the CD. Their voices compliment each other so well that the lyrics flow effortlessly between them and you would be hard pressed to find a more adulatory duet partner when it comes to real, down-home, traditional country music than Randy Travis.

Vince Gill harmonizes with Steiner on "What If She's An Angel," but you have to listen real close to hear him. Steiner's voice is so dominant (in a good way) that I didn't even realize there was someone singing with him until I read it in the liner notes. Despite that, it's a beautiful song and provides a nice balance for the over-all album.

Lonestar's Richie McDonald wrote and sang on the up-tempo "Havin' A Good Time" and this is one of the highlights of the album. It's a fun song and just plain ole feel-good, toe-tappin' music that is made even better by the easy-to-sing-along chorus.

Actress Bridgette Wilson, AKA Mrs. Pete (as in tennis star) Sampras, recorded the spoken word portion of "What Are We Gonna Do About It." At the end of the song you realize that Wilson's narrative is to someone on the telephone. I found myself thinking that it may have been a better song if she had hung up and kept her comments to herself. At one point she asks, "How lame is that?" and by the end of the song those were my exact sentiments. On his website Steiner implies that Kenny Chesney was offered this song and turned it down. Steiner would have done well to follow his lead. However, don't let this keep you from purchasing the album. The rest of the CD more than adequately compensates.

"I Go Crazy" is the only cover tune on this CD. Steiner says he fought to get it on the album because he feels it is such a great song and he has loved it for years. After hearing his version, I was glad he won the battle to have it included. He gives a fresh feel to an old tune.

"And Yet" is the only song on this album that Steiner had a hand in writing and clearly indicates that his talents aren't limited to singing.

I loved the lyrics on "Tell Me Where it Hurts." but I couldn't help but thinking that the lyrics were so perfectly suited for a waltz, or at the very least, a two-step; the music just didn’t seem to fit the words. Not so on "Let Go," an up-tempo song with some good advice about letting go and moving on.

"The Mind Of John J. Blanchard" could easily become the anthem for the Alzheimer Foundation. This is a poignant story song about an elderly man, in the final stages of his life, who is abandoned by his family and friends. Despite a stroke that left him unable to walk, speak or care for himself - he manages to touch the hearts of the staff of the facility where he resides via the sparkle in his eyes. Despite the bleakness of the subject matter, the song is one of optimism and compassion.

I found Steiner's website as interesting as his music. A real cowboy with deep Texas roots, Steiner was born into a genuine rodeo family. The Steiner's have a long and enriched tradition on the rodeo circuit. Great Grandfather, Buck Steiner, is a member of the Cowboy Hall of Fame and rode with all the old legends, including Poncho Villa, Wild Bill Elliott and Annie Oakley. Even his grandfather, the late Tommy Steiner, is a member of the Cowboy Hall of Fame and the Rodeo Hall of Fame for having helped to turn the sport into the all encompassing entertainment-like atmosphere it is today. While it is no surprise Tommy grew up to be an entertainer, especially considering he grew up traveling the country with his 1973 World Champion bull riding father (Bobby) and barrel racing mother (Joleen), it's a wonder he didn't end up on the rodeo circuit like his younger brother Sid. But despite being steeped in real-life country, his music doesn't exactly fit under the stereotypical cowboy hat and he will easily find his niche on today's country radio play lists.

One prominent album reviewer referred to Then Came The Night as "Aerosmith meets Alabama" and I am inclined to agree with that observation. But unlike some of the other new artists coming on the country music scene, Steiner manages to successfully incorporate the "pop" without overpowering the "country" and this album strikes a nice balance between the two genres.