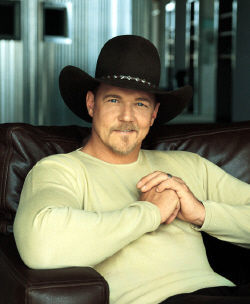 Album Review by: Cheryl Harvey Hill
​
Comin' On Strong is an appropriate title for the new Trace Adkins album and the first single released, "Hot Mama," is just the beginning. Although "Hot Mama" may garner the most controversy of all the songs on this album, and "you wanna?" may become the catch phrase of the decade, there are several more songs on this album that come on equally as strong. You will find eleven tunes whose lyrics are the sum and substance of country but the emotion and message they impart is a universal one.

Adkins flawless baritone reverberates with so much depth at times that you can actually feel your heart rebound on some of the lower notes. As if that isn't enough, on "Then Came The Night," he recites some of the lyrics and manages to convey an intensity of emotion with his speaking voice that some singers can't accomplish with their best singing voice.

Adkins states in his bio, "When we went in to make this album, I got lucky and found a lot of songs that spoke to a lot of experiences I've had; life experiences that I've been through that make me who I am. What I care about most is finding material that's real, something I can sing with conviction and sink myself into." No question that he easily attains that goal with this album and apparently has no qualms about revealing how vulnerable he can be either since the album contains several songs that definitely impart the gentler, sadder, more insecure feelings of love. But then, standing six foot and six inches tall, I would imagine that no one is brave enough (or stupid enough) to imply he is a wimp. I loved the lyrics and, like most women, I'm a sucker for a man who isn't afraid to admit that his own feelings run the same emotional spectrum as mine. This is a super album; marvelous lyrics set to wonderful music.

Releasing a new album less than six months after releasing a CD of greatest hits, takes either a lot of confidence or a lot of grit. I have the feeling that Adkins has plenty of both and he has demonstrated, repeatedly, that he has more than enough talent. Being reunited with Scott Hendricks, who discovered Adkins and guided him in his early success, just about guarantees another major run up the country charts. You can be sure he will be Comin' On Strong.