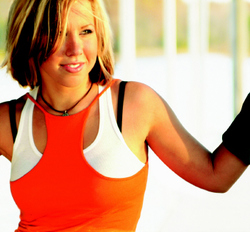 Although 23-year-old Shevy Smith has not signed a major record deal yet, it shouldn’t be long before her name is at the top of the charts. I saw her in February this year when she performed with a small opening band that was not well-known. However, when I saw her during the first weekend of May, she was opening up for Emerson Drive. Both of those concerts were at colleges; Smith mostly plays at colleges and loves it since the students are her peers. Not only does this talented young artist play piano, guitar and sing, she writes all of her own songs as well.

Smith, who told her third grade teacher that she wanted to be Tom Petty when she grew up, was born and raised on a small farm in Kansas. She began playing piano when she was four years old, and guitar when she was thirteen. “I grew up on a farm with a family that stressed the importance of hard work, and the way to get places is to take it step by step,” Smith wrote on her website. Influenced mostly by Tom Petty, Emmy Lou Harris and Sheryl Crow, she realizes that she has the right amount of confidence to know that if she sets reasonable goals, she can accomplish anything.

Her debut album, Blueprint, includes ten tracks. “Most of my songs are very much based upon first hand experience. I find it sort of difficult to write an impersonal song that evokes any kind of emotion,” she wrote. Because of the way she writes, listeners learn a few things about Smith’s life from the incredible lyrics of her songs.

“Blow Me Away,” written in September of 2001, is the first song on the album that Smith wrote. The lyrics exemplify a relationship where two people are in love and enjoying the feelings that come with it.

The lyrics, as well as the guitar and the way Smith plays with her voice are a treat to the ear in “Blueprint,” the albums title track.

“Red Rock Road,” where Smith’s grandparents still live, is an upbeat song about wanting to be close to someone special. The lyrics in this song are easy to relate to because as a kid, many people who live in the country go through what this song describes.

“Kiss In a Stolen Truck” is one of my favorites on this album. Similar to the idea behind “Red Rock Road,” this is another song that many country people can relate to.

Although all of Smith’s lyrics are fantastic, some of my favorites come from “Linger Longer.” While plucking at her decorative guitar during performances, Smith lets fans know that after writing this song for her boyfriend (at the time), she picked a time during their phone conversation to sing it to him. Unfortunately, he picked the same time to let her know he was ending their relationship. She told him she got everything she needed out of the relationship anyway: this song.

It’s hard not having you around/Haven’t seen you in a month of miles/But baby when I break it down/You’re still my favorite way to smile.

Despite all the traveling she has been doing, Smith is working on her second album now. The next album, on which she plans to include more piano, is being produced by Phil Vassar.

The lyrics to her songs are posted under “tunes” on her website listed below.