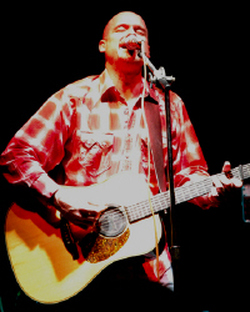 By George Peden
Thanks to a dusty laser. Having sifted through the too big and growing pile of CDs for Waiting in the Wings, I had Darryl Lee Rush and his Palo Duro release, Llano Avenue, in the player. The plan was a systematic play through of the album. I settled back, feet on desk, window open and sun filtering in, all ready to enjoy the unknown (to me) Texan troubadour.
Looking through the credits, I noticed, in addition to 7 penned tunes Rush had supplied, there were songs by Guy Clark and Chris Knight. This was pleasing, as I’m a fan of both.
I settled, pushed Play, and after a splutter, my CD player kicked to life. The first track was to be “Truale”. Given the nature of the album I was expecting a story of location and circumstance, not so. Out of the speakers came a rhythmic pounding that took a moment for me to adjust to. Then, as I started to catch on, came some lyrical familiarity. Wait! Could this be an Eagles tune?
“Life In The Fast Lane” is the last of 12 tracks on the album and it lives up to its promise. Rush has beefed up the pace, hit the vocals with a defined gruffness which is appealing, and, almost, reinvented the wheel. Tampering with Eagles tunes can be risky, after all they’re so well accepted in their original form, but, and to his credit, Rush nails it with his reworking. Thanks to a dusty laser, that tune grabbed and held my curiosity right across the album, from finish to start.
Produced by the creditable team of Gurf Morlix and Joshua Jones, the album is a listener’s delight. It’s a lyrical storybook, told so well by a talented singer and writer who’s one to watch, wait and listen out for.
Standout tracks include the Dobro and accordion-laced “Town Too Tough To Die”, the Chris Knight-penned travelogue “Miles To Memphis” and the cello-infused “Diary Of A Dancer”.
Summary: rich textured vocals against a storybook of dusty towns and touched emotions. I loved it.