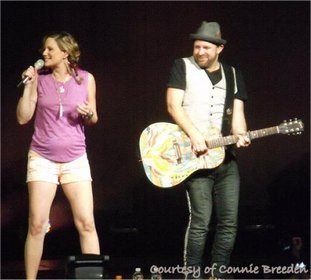 Another hot July night in Tampa, Florida at the "1-800 Ask Gary" Amphitheater. With a slight breeze blowing, I waited for the most anticipated summer concert of 2012, the phenomenal Sugarland's "In Your Hands Tour" to begin.

As a white curtain, with a huge hand print and a heart in the middle, falls over the stage, a spotlight shines on Sugarland's Jennifer Nettles as she beats a drum and Kristian Bush plays guitar, to their opening tune, "Wide Open". After the second song, "Stuck Like Glue", Nettles told the lively audience, "It is all about audience participation. The 'In Your Hands Tour' is completely all about you". That also included Internet votes and homemade posters from the audience which dictated the play list for the evening.

The night was filled with laughter as Nettles was going through posters from the fans, "Oh look at this one" she would say, "Oh, wait, look at that one. So many good ones out here", the show was literally in the hands of the fans. If your poster was picked, they brought you up on stage to sing with them.

Half way through the show Bush picked up a guitar, signed it, had Nettles autograph it, then walked out into the audience and, at random, picked just the right fan to give it to, a darling little boy. They played for nearly two hours, every song I think they ever wrote/sang/etcetra. At one point she even asked her band members for a request. The bass guitar player pulled out her own homemade poster which revealed the old pop song "Whatta A Man", made famous by Salt and Pepper. The middle of the song includes a little rap and Nettles did it superbly, not missing a beat or dance move.

As they slowed it down a bit with their big hit "Stay", the tears welled up in my eyes. Her voice is so powerful, the high notes she hit nearly raised the roof. It was out of this world strong in the most beautiful kind of way.

Nettles called up the winner of the "Sing with Sugarland" competition, Shelly Starks, to sing one of my favorites, "Baby Girl", The wild and crazy Sugarland fans clapped their hands and sang along, per the request of the band and the contest winner. It made me feel like I was winner too.

At the end of the evening Nettles said "We are glad the show is in your hands because we haven't been able to perform some of these songs in a while!" They closed the show with "All I Want To Do", "Find The Beat", and came back out for a much deserved encore to sing, "Something More".

I really enjoyed myself. Jennifer and Kristian have such amazing energy. They were absolutely incredible. They held the attention of the impassioned audience all night. Whether it was a poster request they received, a tweet request before the show to play a song, or the "Sing With Sugarland" contest. No one was left out. They made everyone feel special. It was definitely about the fans. Sugarland is one of the best live shows I have seen.

Sugarland's "In Your Hands Tour" 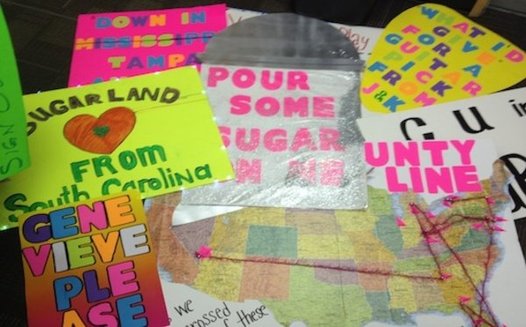 Photo courtesy of www.sugarlandmusic.com
To see how you can participate in the "In Your Hands" tour, click HERE.