A Tribute to a true legend - Merle Haggard 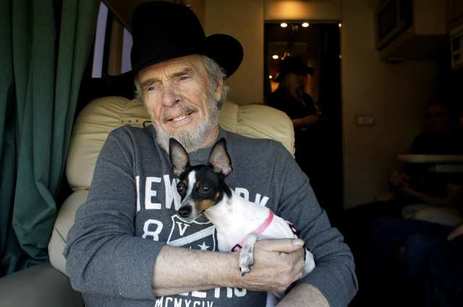 Merle and Fanny Mae - on his bus - photo: courtesy of LA Times
"This man, along with a few others have been the soundtrack to my life. Most of my heroes are gone now but their music will live forever and will always represent an era in country music that will never be paralleled again. It's doubtful that any other artists that came after will leave the legacy that Merle and others will leave.
​
A real highlight in my life was when I got a phone call in 1997. It was Merle Haggard calling to compliment me on a song that I had on the radio at the time... a song called "Flowers". He invited me to come to Tulare, California to do a show with him and Buck Owens. Buck didn't make the show but I did. Merle invited me on the bus and was so kind.

I'll never forget that day and a big reason that I love doing shows today is the fact that I get to honor Merle and other heroes I've met and adored in my life. Those guys have made me the luckiest hillbilly singer/songwriter in the world. God bless them all."  Billy Yates singer/songwriter

All told, Haggard recorded more than seventy albums and more than six hundred songs. He wrote nearly half of them himself and saw forty of them reach number one. Suffice it to say he is, and forever will be, one of the most popular and beloved artists of all time.
Merle Ronald Haggard was born April 6, 1937 ~ left us on April 6, 2016 ~ The world will miss him.
Merle Haggard and George Jones
Merle Haggard - Working Man's Journey