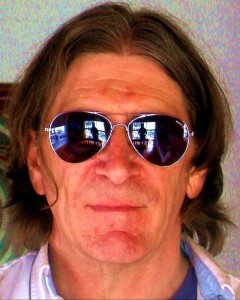 Aussie performer, harmonica and guitar player, writer, radio host and fringe legend Kenny Joe Blake has a new album. As expected from this self-proclaimed daydreaming, carousing and hard drinking talent it’s a winner. This musical veteran who is happiest when he’s singing about indifference, culture, trains and trucks has delivered on his ambition here with 12 self-inked efforts.

The album, The Gravy Train, is out now. Produced by Geoff Peterkin (Pakart Productions) and primed and shunted along with a cast of musical somebodies (The Drifting Nobodys), the album is pleasing and reflective.

More larrikin than corporate, KJB isn’t a CMT cowboy. There are no fat belt buckles and big hats. There’s no need. His passions are real. Simple. Honest. He writes how he feels. Rather than cueing for tunes manufactured for radio play and label dollars, Blake writes his own brand of introspective country. And he lives the same way.

Proof in point is the title cut. Steeped in sarcastic melody, Blake prods at the Man, the Firm and the Government –the fiddle rich ode cuts when it shares its known truth: “Bought yourself a ticket and climbed on board and all they did was say “shovel the coal”…they waste your taxes….the Gravy Train runs on ego and greed that’s why it’s so damn long…”

Other nuggets in this musical mine include “George Brown & C501” a parochial tale of a preserved diesel, which saw first service on 14th May, 1977, the indigenous rich imagery of “Song of Western Wind” and the historical shades of the sinking of “The Pride of Portland, Maine”. The album ends, fittingly, with “Days Work’s Done”.

Hope on board. The Gravy Train is a steady ride, offering crafted musicianship and thoughtful songs, showcased with a voice tuned
for those who prefer their music open, real and provoking.