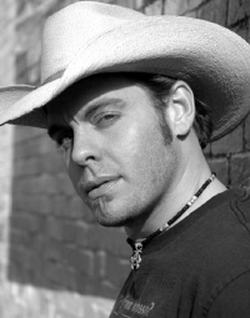 Lonny Aryes is a trucker's son, born and raised in Texas, listening to music from Merle Haggard to Montly Crue. He says thankfully his mom and dad didn't censor his music much while growing up, which he attributes to him having a sound all his own. Lonny grew up with the crazy notion of thinking he'd play for the Dallas Cowboys, until he got a bit older, he had a second thought on that and starting singing and doing the cover song thing, not really realizing he was good enough to make a living at it. Lonny has a huge sense of humor and writes songs about the experiences he's been through. He's opened for guys like the awesome Chris LeDoux, (what an honor) Gary Stewart, Joe Diffie, Gene Watson & a few others.

Lonny moved to Nashville (Nashvegas) to live his dream of becoming a big star, played a few gigs and he and his band decided they better get serious
about song writing, if that dream were to come true. Now if you've been to Lonny's Myspace, you'll know that he's not serious about very much. Except for when it comes to his dream, he is very passionate about his music and he can then be very serious. Just listen to some of the songs on this album. I read who his influences were on his Myspace page and this is what he wrote: Jack Ingram, Steve Earle, Charlie Robison, Bruce Robison, Chris Knight, Johnny Cash, George Jones,Willie Nelson, Gary Allan, JACK DANIELS, Pat Green, The Great Divide/Mike McClure, JIM BEAM, Waylon Jennings, Billy Joe Shaver, & any of those guys that do their own thing and to hell with everybody else. This country boy with a great sense of humor is in the right place, take a listen to him and decide for yourself.