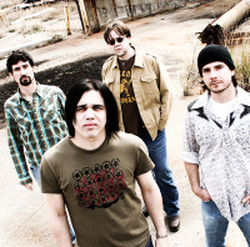 ​By George Peden
Louisiana-based Americana and Southern-tinged rockers Sweet Root have released a self-titled EP. With three choice tracks, these guys have a distinct sound. It’s rough, raw and edgy – just like the subject matter they sing about.
From the opening jangle of rock-inspired guitars, these guys claim attention on the energized "Half A Mile Away". It’s a catchy tune that could happen if radio breaks with its formatted constraints. Telling of the misery of losin’ and leavin’, all watched from a pick up cabin on a gravel road, half a mile away, our hero’s gone and he can’t come home, while his lady love is burning midnight candles.
The relationship whine doesn’t become a male whinge, thanks in part to the bruised and honest vocals of Kansas-born Dustin Powell. With the taut playing of his band mates – Brett Smith (drums), David Wallace (guitar, vocals) and Lance Dubroc (bass, vocals) –Powell handles hardship well with a voice that aches with country sincerity.
The EP rounds out with more heart-on-sleeve fare, the moody and tormented plight of "Tuesday Night", and the realization that it’s later than that on "Matter Of Time".
Check out the guys at their Myspace site. There, they have a host of shows that’ll take them from Colorado to Texas in 2007. If they make your neighborhood, do yourself the favor – see the show, buy the album