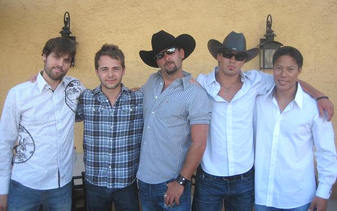 Coldwater Canyon Band is comprised of five handsome guys who know how to keep their fans on edge of their seats. Their new CD titled Just Gettin Started is not your typical country album. Growing up in Tennessee, lead singer and song writer, Howie Vaughn wanted more than the traditional "Nashville" sound. The California "Kountree Boyz" have done just this with their beautiful ballad "Nobody Knows." It tells a story, based on his own a feelings, of growing up with a truck driving father who, out of necessity, was often gone, leaving him and his mother alone.

"Peace Of Mind" is my favorite song on the album. It's a meaningful salute to the American soldiers. "Redneck Soldier," and "Bounce Wit Me," on the other hand, are sure to get you on your feet.

The CD consists of thirteen songs. Some may say thirteen is unlucky, but for the Coldwater Canyon Band I would say its just the opposite. Entertainment Tonight says this band is one of the hottest young country bands to come along in quite some time and their unique, fresh California sound really makes them stand out from the rest. They also say these guys are the one's to watch and I certainly agree.