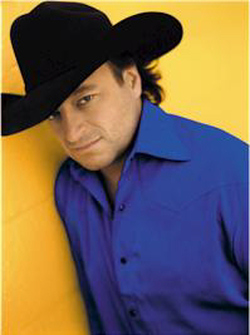 by Cheryl Harvey Hill
​
Honky Tonk music is an integral part of our country music heritage and with Mark Chesnutt leading the campaign for Savin' The Honky Tonk, we are in good hands. Even better news, you no longer need rowdy beer drinkin' friends, a room full of cigarette smoke and sawdust on the floor to get the full experience. You can simply put Chesnutt's new album in your CD player, belly-up to a bar (a kitchen counter will do) and let the music transport you back to where it all started.
The colorful honky tonks throughout America gave birth to a unique style of music and today they have become the incubators that keep that music alive. Chesnutt artfully delivers the distinctiveness of this music with absolute ease and acoustical ambiance. It is also evident that he is aware of the fact that there is something about the resonating sound of a steel guitar that is utterly captivating.
With his father, Bob, as his mentor and major influence, Chesnutt honed his traditional singing style in the honky tonks of Texas before making his way to Nashville. He was obviously a sagacious pupil since his resume' to date lists fourteen number one hits, twenty-three top ten singles, four platinum albums and five gold records.
On this album Chesnutt has skillfully put together fifteen songs that will have bona fide honky tonkers across the country shouting, "amen!" while those who have never even been near a honky tonk before will suddenly experience a profound and unexplainable craving for beer and peanuts by the second stanza of the very first song; "Somebody Save The Honky Tonks." This is the only song on the album that Chesnutt had a hand in writing and the catchy lyrics, along with the easy sliding melody, will definitely leave you hoping that he will write more for future albums.
Lee Ann Womack makes a guest appearance to sing harmony on the classic Cochran/Lane/Gosdin penned "Would These Arms Be In Your Way." Overall, the list of writers who contributed to this album is impressive and the quality of the material reflects this fact.
This is Chesnutt's debut album for the Vivaton Records label but this endeavor reunites him with Shelia Shipley Biddy, Executive VP National Promotion and Artist Development, who he credits for the bulk of his previous successes. He says, "Vivaton is a good place for me to be. It just feels right."
Well, I know one thing for certain after listening to Savin' the Honky Tonk ... even after the twentieth time or so … we're glad it feels right to Chesnutt 'cause it sure sounds right to the rest of us.​