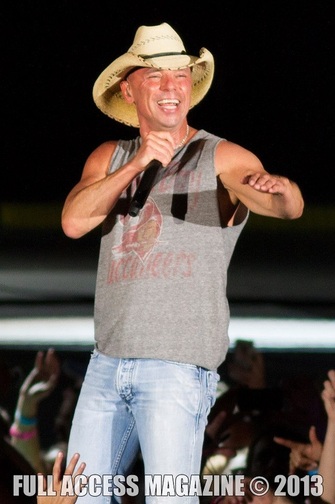 Nuts About Country teams up with Full Access for the biggest country show of 2013. You guessed it, it's the Kenny Chesney No Shoes Nation Tour. This is the third year in a row that Chesney kicked off his tour in Tampa, Florida and he packed the Raymond James Stadium with 47,492 crazed country music fans.

First up was newcomer Kacey Musgraves who was nominated for four Academy of Country Music Awards, including New Female Vocalist of the Year and Female Vocalist of the Year, in the company of the country superstars Miranda Lambert, Martina McBride, Taylor Swift and Carrie Underwood. She entertained the audience for nearly forty-five minutes with songs from her "Same Trailer Different Park" album, including the popular songs “The Trailer Song”, "Merry Go Round", and "Follow Your Arrow", the song that encourages you to express yourself, no matter what. She included in her set "Mama's Broken Heart," a song she co-wrote, that has become the newest big hit for Miranda Lambert before wrapping up her performance with a little whistling when she closed with "My House".

Next up was the Eli Young Band. These guys were awesome from beginning to end. They started out with the title cut from their album "Life at Best”. This brought the entire audience to their feet and pretty much kept them there through their entire set. One of the best parts of their show was when they did their rendition of Lynyrd Skynyrds, "Gimme Three Steps". The band continued their set with tunes we were all familiar with, "Even If It Breaks your heart", "When It Rains", and "Always The Love Songs”, before closing with their number one platinum single, "Crazy Girl", which seemed to be everyone's favorite. After seeing them perform live, it's easy to understand why the band is nominated in the 48th ACM Awards for Vocal Group of the Year and their single "Even If It Breaks Your Heart" is nominated for Single Record of the Year and Song of the Year.

The show gets better and better as the flashing lights begin and the haze dissipates and you hear bong, bong, bong, bong - Eric Church is on stage, opening with his smash hit "Creepin". Church brought the enthusiastic crowd to their feet the minute he walked out and that's where they stayed for his entire performance. He performed several of his big hits including "Love Your Love The Most" and "How 'Bout You", keeping the audience all fired up with "Drink In My Hand" and "Jack Daniels", before slowing down a bit acoustically with "Like Jesus Does", and then picking it right back up with "Homeboy".

Church then took a boot from an audience member, held it up and began to sing "Lotta Boot To Fill". After the song he signed the boot and returned it to its rightful owner. He continued to pump up the crowd with many more hits from his “Chief” album before closing his show with his gold certified number one hit "Smoke A Little Smoke". Coming back for a encore he told the rowdy audience, "This song reverts back to being seventeen and making memories" then he closed the show with "Springsteen". Church says, "When It's show time, I put on the sunglasses and the hat, and that's how people know it's game time.” And he did just that!

The evening got a little cooler and I watched as the curtain covering the stage blew in the wind. The moment the curtain rose a video screen flashing crossbones and a pirate flag broke up into pieces, like a jig-saw puzzle, to spell out Tampa, and the crowd went nuts, cheering and screaming. There were pirate flags blowing in different sections of the stadium, then the stage darkened for a brief second, and out from among the flashing lights that had appeared, the music began and out stepped country superstar KennyChesney.

He opened with "Rockstar" then went right into his set with his hit song "Reality", before telling the wild crazy fans, "We have been waiting to come back here, it's our third time coming to Tampa, Florida to kick off the tour and it feels good! You know why we open in Tampa? Because everyone here cares about the music, is passionate about the music, and the other reason, it's Florida, it's warm, you got the ocean, The Buccaneers, and the fans here are off the chain".

For over the next couple hours he would play a set of twenty-six songs including everyone's favorite, "Old Blue Chair". This was a real treat for the fans since he normally doesn't include this song. The audience loved singing with Chesney to "You And Tequila", "Everyone Wants To Go To Heaven", "Somewhere With You" and "Sweet Summertime".

As the jubilant crowd danced in the aisles to "No Shoes, No Shirt, No Problems", and "On The Coast Somewhere Beautiful". It was a delight when Kacey Musgraves came out and joined Chesney on "Come Over". As the show came to end Chesney wrapped up with his hit songs "Anything But Mine" and "Boys Of Fall".

For his encore he sang his 1999 hit song "She Thinks My Tractor's Sexy". Much to the surprise of his fans, after singing he signed a Tampa Bay Buccaneers Football helmet and gave it to a random fan in the audience and then did the same with an autographed guitar. The show might be over here in Tampa, but the pirate flag sails on. Join in the festivities at the Tortuga Festival on April 13 in Fort Lauderdale, FL.