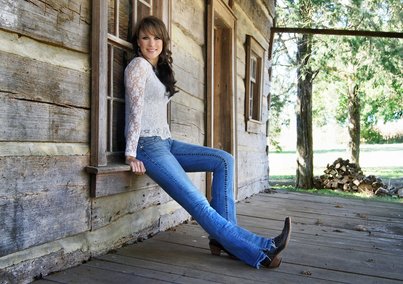 ​If you have never heard of Jessie Lee Cates, you're missing out. Her album is composed of six cleverly written songs with awesome lyrics. All of her songs are obviously heartfelt. Each one is not only captivating but totally entertaining. The songs on this album are packed with lots of emotion, spunk, and sass.

I couldn't pick a favorite song because they are all great! "The Boot", however, grabbed my attention since there was a time when I could have related to those lyrics. She sings, "Worn down, torn up, totally forgotten, looking like its seen better days, hole in the sole from being under somebody's heels, I know how that feels." I think just about everybody can relate to those lyrics at some time in their life.

Grab your favorite air guitar, clear off the coffee table, throw "Chick Night" onto the record player and let the good times roll. This song tells us we can have a great time, just this follow the lyrics, "Kick off your shoes, shake off the blues, chick night. Good times, no guys, chick night".

"Scotland" is a beautiful story-song about the heritage of Cates. The song actually starts off with bagpipes and incorporates them throughout the song. She sings of Loch Ness, kilts, and cobblestone houses. It's one of the first country songs I have heard that actually plays the bagpipes. It's a fun song and one that is easy to get lost in.

Both "Wayward Rose" and "Behind Your Back" have such strong hooks and poignant, emotional lyrics. I had such a powerful connection to both songs. "Wayward Rose" is the perfect daddy/daughter song. Cates sings about growth in her career, losing her daddy and all the special memories they made and shared on the mountain. Sadly, I honestly related to this song. This one is sure to bring on the tears.

I recognized myself in "Behind Your Back" because I have that someone special in my life who tells his friend's how much he loves me and shows them pictures but he doesn't always tell me. Guess he thinks, I already know. [insert smile here]

The title cut, Let Your Country Out, is just plain fun that sings about exactly what the title says, "Tappin’ toes, slappin’ knees, singin’ sweet harmonies". In fact, this whole album is awesome. Cates voice is amazing and it's true country. I am hooked, I'm sure when you hear her sing you will be too.