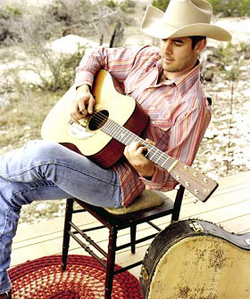 Album Review by Cheryl Harvey Hill
​
Trent Willmon certainly has a way with words and his talent for writing isn't limited only to song lyrics as he cleverly illustrates on the song title of track two on his self-titled, debut album. The full title is "Dixie Rose Deluxe's Honky Tonk, Feed Store, Gun Shop, Used Car, Beer, Bait, BBQ, Barber Shop, Laundromat." After listening to the album through a couple of times, I realized that this song title isn't just a title; it is an appropriate analogy for the creative community and environment that gave birth to this latest Texas import to Nashville .
Even if you have never set foot in Texas , there is a good chance you have been to, or driven past, a " Dixie Rose..." Nearly every rural community across the country has a hub where you can come up with a plan for world peace over a cold beer while your best friend's brother changes the oil in your car next door. Willmon grew up in such a town and, like all true Texas troubadours worth their salt; he readily admits that his inspiration comes from his own life which is probably why this handsome cowboy, with the husky baritone voice, is able to sing with such convincing feeling.
Willmon co-wrote on seven of the songs on this album and they are all good but his marvelous flair for writing catchy lyrics, and delivering them with whatever emotion is appropriate, is exemplified on the only song on this album that he wrote by himself, "Medina Daydreaming." There's some heavy duty heartache there and you don't just hear it, you feel it. Willmon is definitely a refined entertainer. His lyrics reflect the integrity and honesty of traditional cowboy poets like the legendary Red Steagall. On the slow ballads his passionate delivery is on a par with some of the true legends of country music while on the up-tempo tunes he is equally as skilled as the dynamic Big and Rich in delivering an over-the-top punch but without any of the rebellious or offending (to some) attitude.
Willmon has been quoted as saying, "I've never really fit in anywhere," but my guess is that he is going to fit in just fine in Nashville and, quite frankly, anywhere else he chooses. According to his bio, he doesn't just play guitar, he built his own from scratch. He doesn't just barbecue, he built his own smoker and since he loves to cook, he started his own catering business. He also trains horses, rides broncs, ropes cattle, welds, tools on leather, enjoys reading literature and the list goes on and on. Listen up parents. The message here is clear. Willmon grew upwithout a television in his house. Boredom obviously results in creative genius and dynamic over-achievers not to mention truly remarkable singer/songwriters; oh yes, and extraordinary cooks. For his album-release party, Trent served the crowd beef brisket, smoked sausage, potato salad, beer bread, baked beans and strawberry cobbler he'd prepared from scratch. He recently won his first Tennessee chili-cooking championship. He also specializes in "beer butt chicken." Now if all that doesn't lead to unique super-stardom, I don't know what will.
Willmon subscribes to this philosophy of success: "Work your ass off doing something you love. If you can make a living, that's more success than most will ever have. No one owes you anything. Trust in God, work hard and live - it beats the alternative."
I just know there's a song in there somewhere and it sounds like a number one hit to me.