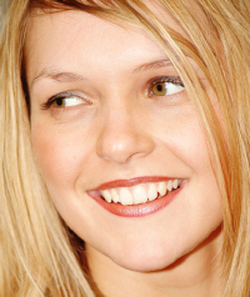 ​
By George Peden
​
Glaswegian Laura McGheee describes her music as “Crossover Celtic Folk Rock with a hook", and she’s right. It describes her debut release, Green Eyes, to a T. The likely newcomer, who’s well credentialed after attending the Royal Academy Of Music, has hit the music shelves with10 mostly co-written tracks.
McGhee in a literal sense has many bows to her talent. She plays the fiddle. Beautifully. She sings. Delightfully. And her penned songs, assisted mainly with ink from backing vocalist Phil Ferns, have a listenable quality that draws you in and requires no fast forwards.
Note perfect virtuosity plays out on the crafted and jig-inducing “Stepping Stone”. McGhee cajoles caresses and tightens her hold on notes that prove to dads and moms universally: don’t buy ‘em candies spend the money on music lessons – it pays off.
Musical familiarity comes with the Lennon/ McCartney classic “I’ve Just Seen A Face”. McGhee’s brogue-laced vocals add a charmed dimension to the song. Another personal favorite is “Tell It Tae The Lover”. The album opener, with its folky Corrs type feel, blends the talents of good writing, solid playing and McGhee’s voice. It’s a standout.
Across an album that echoes with Celtic charisma, there’s nothing that jars, jams or distracts. Listen out for the made-for-movement “Reachin’ Out” and the homeland influence of “Dundee Toon” for the point proven.
Laura McGhee is a wee bonnie lass and she’s winging her way for shows in America and Canada later this year. Don’t keep her waiting in the wings any longer. Catch her act if you can.