Kenny Chesney - When The Sun Goes Down 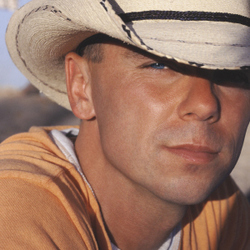 CD Review by Cheryl Harvey Hill
​
With the multi-platinum "No Shirt, No Shoes, No Problems" catapulting him to the category of superstar, we have every right to expect great things from Kenny Chesney from this point on.When The Sun Goes Down, an impressive musical anthology, is certain to surpass even the highest expectations.

The first track on this album, "There Goes My Life," is a thought-provoking song that immediately made it's way to the top of the country music charts, and rightfully so. This track also sets the pace for the rest of the album. Chesney says that he "believes that songs and music stamp our lives and create the movie of our past." He goes on to say, "Sometimes, if the memory is strong enough, hearing that one song can actually take you back there for a moment." I couldn't agree more.

The title song is characteristic of some of Chesney's previous tunes that prompted fans to dub him the "calypso cowboy." After the delightful "All I Want For Christmas Is A Real Good Tan," is there anyone who doesn't know about his love of the sand, the sun and the Caribbean? "When The Sun Goes Down" is a lighthearted musical confirmation of that well-known fact, and one of several up-tempo tunes on the album.

There are plenty of emotion packed songs included here too. "When I Think About Leaving," "Some People Change," "Anything But Mine," all render poignant heart tugs. But one of my favorite songs on this album is an insightful waltz co-written by Chesney and Skip Ewing, "Being Drunk's A Lot Like Loving You." The comedic implication of the title contradicts the seriousness of the lyrics and the moral of this story will be recognized by anyone who has ever said, "I'll never do that again." The analogy between a hang over and a broken heart creates a simple ode to a complicated life transition and the title almost guarantees it will be a traditional country classic.

I totally enjoyed this album. I think it reveals a more mature and sensitive artist. The choice of songs on this album also showcases a more confident Chesney. One who is not afraid to communicate vulnerabilities. Great songs contain recognizable fragments of our own lives or provide us an escape from our own lives and this album supplies plenty of both. When The Sun Goes Down contains fourteen great songs, including three, recorded live, bonus tracks. Something for everybody on this one. It's a keeper.