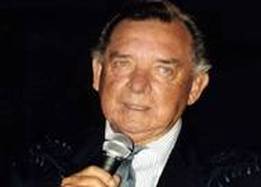 An Editorial by Marty Martel©

The velvet voice of Ray Price will never be copied, imitated, or be mistaken for today’s bubble gum artists who cannot reach the same level as the one and only voice in country music that is unmistakably distinguishable with the first notes of any songs that he sings. He is the Master of soulful ballads, honky tonk barroom songs, and any song that he wants to put his stamp of approval on. Ray has raised the bar so high for singers of today that they no doubt will never reach the heights of Ray Price in his younger days, and the ironic part of this, is that there is no one that I know who can replicate his vocals in today’s country music. When Ray Price sings, everyone listens, because his vocals are so mesmerizing to those that have been privileged to hear him sing, no matter if it is at one of his personal appearances or on his records. What you see is exactly what you expect, and I have been around Ray long enough to know that he treasures his God-given talent that he has nurtured through his life. Even now when I hear him sing I am caught up in the presence of watching his fans listen to him touch their hearts as he continues his journey through each song he chooses to put his platinum touch upon.

Ray Price is responsible for the four-four shuffle that originated in Texas, and probably is responsible for the famed two-step dance. Ray is responsible in many ways for the dress code of country artists and their bands back in the early days of country music, because he believed that an artist is special to his fans, and they should always look as good on stage as the expectations of their fans. Take a look at today’s country artists and their bands, and tell me what you see. The next time you see Ray at one of his shows, you will see his band all dressed alike, and you will hear what bands should sound like-just like their records. You will hear him sing his many hits songs exactly as they were recorded. He is the real leader of his Cherokee Cowboys Band, and he has been the reason that Willie Nelson, Johnny PayCheck, Roger Miller, Johnny Bush, and Darrell McCall have went on to have super careers in country music. Ray Price was their mentor. He is the conductor of his music and a troubadour for country music.

He is not happy with a lot of today’s country music. I remember when “For The Good Times,” was released, and one of the first people who wanted Ray on their show, was Johnny Carson, who became one of Ray’s great friends. Ray made several appearances on the tonight show. Ray opened the doors to what traditional country music and honky tonk music meant to all of us who love fiddles and steel guitars, and Ray keeps that sound alive with his great band.

A born and bred Texan who served his country as a member of Marine Corps in World War II, many fans do not realize that Ray is a great animal activist. Ray told me that he will not bypass an animal in distress not matter where or when. At one time he had at his personal kennel, 26 stray dogs that he was taking care of. Ray Price is a great horse lover also. But when he steps on one of his two tour buses, his life is his singing that he loves so much.

Price was elected to the Country Music Hall of Fame in 1996. In 2002 Ray released the studio album, Time, and I was very fortunate to be a part of the Time CD which in my mind is the best grouping of songs that Ray Price ever released in his years of recording. Sadly, today’s radio would not play the songs because Ray was not of one of today’s new artists and the songs had too much fiddle and steel guitar on the tracks, but I can tell you Ray was thrilled.

There were four songs on the project that I brought to Ray which he included on the CD, and I promise you that once you hear Time it will be your choice of Ray Price music that you will listen to many, many times, as I do. If you have not been able to get a copy of the CD, write or email the Ernest Tubb Record Shops and you will be able to purchase a copy of the best country music CD you will ever hear, by the best voice in country music that you will ever hear. Time will always have a special place in my life. The song Time was brought to the studio for Ray, from his writer friend Max D. Barnes, in the afternoon of the last day of the recording session, and Ray liked it so much, he went back into the studio and recorded the song in two takes.

Ray, who was diagnosed with cancer this year, is now in complete remission, and is already on schedule to perform close to 100 days in 2013. He has been honored with the biggest and best awards of the music industry during his music career, but the one award that has become the most important one of his life, has been his acceptance that he has cancer and has won the battle by believing he would win. Ray now 86 years old will be recording this month, a new project of only love songs, dedicated to his loyal fans. And who better to sing love songs then Ray Price. The project will be completed within the next few weeks, and I will keep everyone posted on the progress of the when the CD will be released. Ray Price is still the most prestigious voice in country music, and is revered by his peers from all music genres who have placed him on a pedestal of perfection. HE IS ALSO MY FRIEND.