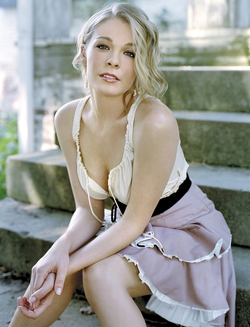 With the success of one song, Leann Rimes forever raised the bar for singers of all genres for all time. She was, and still is, the personification of talent. Peerless. So it is not surprising that at the ripe old age of only twenty-one, she has amassed enough Greatest Hits to fill up an album. And fill it up, she does. There are nineteen tracks; fifteen greatest hits and four new tracks. There is also a bonus DVD with four complete videos.

It was 1997 when I first met the then thirteen-year-old phenomenon. It was after a concert and she was sitting all alone at a table backstage. She was signing only her first name to a stack of publicity photos. Why not, I thought, who doesn't know who "Leann" is. One thing was very clear as I watched her later during the meet and greet, she knew exactly who she was. She was composed and sternly professional; displaying a maturity and self-confidence that we most often attribute to age. This was not your average child. This was a young person, wise beyond her years, who was on a mission. She had taken a solid foothold on the ladder of success and there was no doubt which direction she was going.

Her smash hit, "Blue," made her the youngest performer in country music history to debut at number one on the sales charts. The skeptics who predicted that she was a "one-hit wonder" had to quickly eat their words when "One Way Ticket (Because I Can)" burst onto the charts quickly followed by "Unchained Melody." She was not only the youngest entertainer, but also the first country music entertainer in history, to win a Grammy for Best New Vocalist. She won a second Grammy for Best Female Country Vocal Performance for "Blue." Despite her well-publicized struggles through puberty, and negative critics who accused her of abandoning the genre that made her, she has allowed us to witness a fascinating metamorphosis. Now displaying a physical beauty that is akin to that dynamic voice, she is just getting started.

With a new husband, a new children's book and a very cool new commercial for Dr. Pepper that contains some really great harmony with, the one and only, Reba, she has continued to grow as an artist and entertainer. It wasn't her plan to just succeed. She set her sights on high achievement, and she never loses site of that goal.

This Greatest Hits collection is as eclectic and captivating as Rimes, herself. If you like good music, and aren't concerned about limiting yourself to one genre, you won't be disappointed.