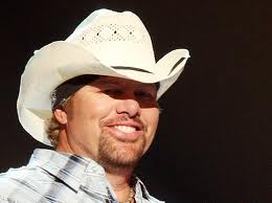 The only thing better than a concert at the "800 Ask Gary Ampitheathre,"  in Tampa, Florida, is a Toby Keith concert where one of my favorite singer/songwriters, Eric Church, and newcomer TJ Hodges, share the same stage.

Texas native, and "future country music hunk," JT Hodges, treated us with his debut hit, "Hunt You Down". Hodges was recently signed to Show Dog Universal label which is owned by his superstar boss Toby Keith. With playmates like Church and Keith, my guess is we will be hearing a lot more from Hodges.

Church has a lot of good things happening in his life. Just days after the birth of his first-born son he was presented with his second gold album plaque from none other than country music star Keith Urban. Church is best known for his singles "I Love Your Love The Most"  and "Smoke a Little Smoke." His most recent album "Chief" went number one with the help of the popular single, "Homeboy."

Never would I have guessed when I took my Mom to a Toby Keith concert that she would revert back to being a sixteen year old groupie/psycho fan. The more out of control she got, the further I moved away, until I looked around and realized everyone was acting like a sixteen year old, out-of-control groupie. Wow! I quickly decided, if you can't beat them, you might as well join them. Why not!

After a hilarious video from Ford, truck sponsors of his "Locked and Loaded" tour, the white hat wearing cowboy came out singing "American Ride." This song served to gear us up for what was yet to come. Keith entertained us with many of his past hits including one of my favorites, "Should Have Been A Cowboy" and his twenty-ninth number one single, "Made In America." We got a sneak-peek into the new album he performed the poignant ballad, "Clancy's Tavern," which he dedicated to his late grandmother. Moments later he had everyone laughing hysterically with his wacky rendition of "Red Solo Cup."

Some of the songs that received the greatest reaction from the audience were "I Love This Bar," "How Do You Like Me Now," and a duet with Willie Nelson, via video, on "Beer For My Horses." He ended his concert with one of the songs from the new album, "I Need To Hear A Country Song." For his encore he treated us to a rousing rendition of "Courtesy of the Red White and Blue" then closed on a more serious note with his passionate tribute song, "American Soldier."

As the concert came to an end, judging by the happy faces of all those Toby Keith fans I think that after all is said and done, going back to a time when you are sixteen might be good for whatever ails ya. ("Red solo cup / I fill up / let's have a party")