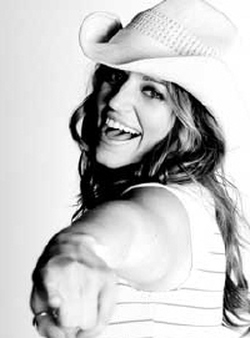 ​Wow! There’s more smiles here than a Colgate ad. American country newcomer Skyla Spencer beams out from every picture opportunity on her debut release,You Said You’d Call Me.  And she’s got every reason to smile. Her debut is getting radio play both local and abroad, and she’s obviously confident with her song writing prowess, having written all 10 tracks on the CD.
In tow with a sprightly band of session musos, this psychology and dance degree graduate is embarking on a musical career that started at the age of 13 while singing in her cousin’s band.
“Overall I would describe my music as up-lifting, fun, great for dancing, with a unique sound,” says Spencer.
It’s a description that sits well with tracks like “You Said You’d Call Me” and “Chuga Choo Choo” a karaoke anthem that according to Spencer’s bio made #1 on the Indie World chart in 2002. While the album rocks and bops, there are some telling tunes one in particular, “If I Were Rain”.
“I wanted to write a song that sends a powerful message and makes a clear statement,” says Spencer of the song dedicated to serving troops overseas. “This song talks about the troubles we are currently facing and how to deal with them.”
The album is out now and is available through Skyla Spencer’s web site