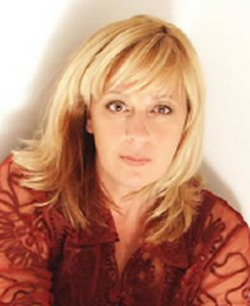 By George Peden
​If you’ve kept your eye and ear close to Australian country music then names like Kasey, Beccy, Gina, Keith, Adam, Lee and Troy will bring a knowing nod. Now there’s another name you need to learn – Stacey Morris. Mellow and moody, only to become vibrant, sassy and rocking the next, her album is a music lover’s, a country music lover’s, gem in the pile.
Knocking around music traps since the age of 15, the talented singer has been on a slow simmer, honing her craft at fairs, festivals and clubs. Now with this latest release, as her web site says: She may be Australian but she’s taking the world by storm. A little adventurous hype, maybe, but the gal can sing; for this album she’s chosen gifted players, crafted writers and pleasing songs. It all adds to wider possibilities.
The album opens with the title track. Penned by the writers of Reba’s major hit, “Somebody”, Sam and Annie Tate, the song is as inspirational as it is melodic. Morris is high jumping her own borders and boundaries by winning the 2005 Frank Ifield International Spur Award and gaining solid independent radio play. She’s also fast becoming a fan and industry favorite.
Morris’ style offers a range that doesn’t waft or whimper, but, rather, cuts right through to offer the right lyrical shadings. The voice, rich and full, works well on choice choosings like the Irene Kelley-penned “It Wasn’t Me”. Listen out for winning cuts like the Gretchen Peters-penned “I Don’t Know” and the evocative “Just Around The Eyes”, written by Gary Burr. Listen also for Carole King’s “So Far Away”. Already a hometown favorite in Oz, it’s just one of 12 musical reasons to check this album out.
Stacy Morris. Remember the name. She’s set to join some others you know