Billy Don Burns - The Music Says It All 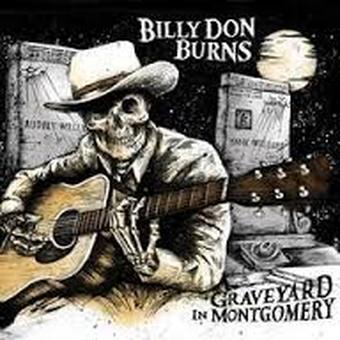 There’s a dated quote, which runs along the lines of art comes from examining the shards of a life lived. The quote asks: are we, though, still bleeding or healing?

Arkansas renegade Billy Don Burns flips both ways on his Rusty Knuckles release, Graveyard in Montgomery. GIM holds a proud place within a polished catalogue of five previous albums. As with his earlier work, Burns is hauntingly honest and cutting. To those who adore hats, wide buckles and mile long touring buses, the onetime fiancée of Lorrie Morgan must seem totally out of place in today’s New Country roster. He is.

And I suspect he couldn’t be happier.

Listen to the words of the first cut on his new release. “Welcome to the Neon Circus”…step right up and see all the clowns, just a few drinks buys a ticket to the greatest show in town…” The broad brush canvas of many Burns’ tunes paints an image of the honky-tonk and the gruelling life of the troubadour. A life he knows. A life he has lived.

He’s lived dark and dangerous. But he’s also enjoyed understood admiration. Willie Nelson saw the talent in BDB’s co-write of “I Don’t Have A Reason To Go to California Anymore;” Sammy Kershaw recorded “Honky Tonk Boots”; Johnny Paycheck saw the crafted style of Burns, taking him onboard as an album producer, while former Arkansas governor and eventual president, Bill Clinton, gave the masses what they wanted and made March 27, 1983 Billy Don Burns Day.

Between there and here, there have been the drug dramas, the jail time, the shattered disappointments of a selfish music industry, the divorces, and all the while the endless miles, the late nights and the grind of a career spanning over four decades. A career Burns has said he loves. Country diehards share the love too – at current count he has nearly 5000 friends on Facebook…and growing.

That love of the music, the passion, and at times the pain plays on the Hank Williams homage “Graveyard in Montgomery”. The easy, countrified back beat tells of a day in the life of a gig bound singer, someone who sits, reflectively at the graveside. As the weather turns and the wind and rain bite, our hero prays if thunder struck, his guitar will survive.

Burns is real deal outlaw. The voice wraps and winds, matured by one too many cigarettes and one too many late night lubricants, into a gravely and bristle brush experience. If you were to look for the link between artist and audience, it’s in his ability to relate. He writes. He sings. And he does it with a precision marked and made for the common man.

The 11 mainly self written tracks are heartfelt. Written with solid believability, Burns rings true with the introspective wish of “ I Need Something Real”; he shares his deja vu with “Hey Willie” where he asks the superstar to record another one of his songs and he opens the cardiac valve fully, as he shares domestic misery of the hurtin’ kind on “This Broken Heart of Mine”.

The Tom Paxton classic “The Last Thing on my Mind” comes darkly etched, as Burns and his co-harmony (Lindsay Moore) pull on hearts and known hurts. The track aches and touches – the hallmark of a brand of country seldom heard these days.

One track inked with weariness, history and hopeful redemption is the crafted “Trying to Get to Memphis”, with a hat tip to the road and the trying times they offer, BDB nails it. Just like he does on every other track here.

Billy Don Burns.
​
Get the album. Do yourself a favour.

The music says it all.