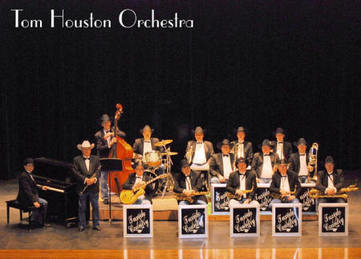 Tuxedo Country is a delightful compilation, splendidly performed by the Tom Houston Orchestra. The album kicks off with the Willie Nelson penned, "Crazy," and goes on to deliver nineteen more of the greatest and most memorable hits to ever come out of the country music arena. The list of songs and songwriters on this album reads like a "who's who" in music. Some of the tunes, although they were introduced via country radio, managed to eventually cross over and found themselves right at home on mainstream radio as well. "Help Me Make It Through the Night," "Don't It Make Your Brown Eyes Blue," "Could I Have This Dance," and "You Are My Sunshine" are just a few of those wonderful crossover tunes that are included on this album.

The Tom Houston Orchestra was formed in 1989. Houston holds a Masters and Doctorate Degrees in Performance from Florida State University. Although, as a freelance performer on clarinet, flute, and saxophone, he has performed throughout the United States, Houston is most at home in Nashville. He grew up in Tennessee and his first professional experience was in Nashville with local orchestras. During the course of his career he has shared the stage with numerous celebrities and played with countless orchestras across the country, including the world famous Glenn Miller Orchestra.

The album is dedicated to the late G. Darrell Holt. Holt was an Associate Professor of music at Stephen F. Austin State University, in Nacogdoches, Texas, where he taught various jazz courses, arranging, and music theory from 1968 to fall of 2000. He was a nationally recognized jazz instrumental and vocal clinician during most of his life. Holt performed extensive work in recording studios as a conductor, arranger, composer, and performer, producing more than forty albums. As a performer, he was an accomplished pianist, vocalist and trumpeter.

Holt passed away from heart complications in 2000; Tuxedo Country is a most fitting tribute to his memory.