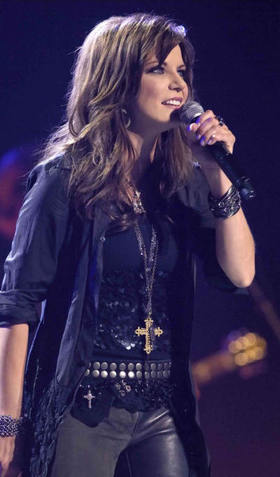 The rumble starts. Low. Then, it builds. The lights dim. From the moment Martina McBride rises through the darkness of the stage floor at her concert at the i wireless Center in Moline, Illinois, you know this is going to be special. After all this is Martina McBride. And just to create the needed audience amperage, the 12000-seater looks rafter packed. Yet despite the awards, the TV specials and the CD sales, despite the legendary status, the loyal fans and a busy touring schedule, this is McBride’s fist live DVD.

The wait has been worth it.

Recorded last year, September 29, 2007, as part of her Waking Up Laughing Tour, the celebrated singer knows how to crank an audience. That she’s been doing it, and so successfully, since 1992 is keenly obvious here. Here the tunes, almost everyone a favorite, and McBride’s polished stage savvy has the audience lip-syncing while hanging on every sky punch and every stage prancing move. For McBride, a 2008 CMA nominee for Female Vocalist, who comes blessed with one of the best voices in country music, the show moves from hit to hit effortlessly.

For fans of the singer born Martina Mariea Schiff, this is a bonus package. The DVD, a treasure on its own, comes backed up with an eight track CD. While the deal comes marketed as a live CD with a DVD bonus, the real interest will be the 20-track concert. For this former T-shirt seller for Garth Brooks, this concert is a showcase connection between an artist and her fans.

McBride, a musical veteran, once tagged as country music’s answer to Julie Andrews, is polished, confident and note perfect. On “Live”,she works her way through a history of hits that started with her commercial breakthrough, “The Way That I Am”. The fans love her; a look to the mainly female populated audience, many with signs clearly showing their adoration, shows a loyalty that only comes when you have the score on the board. Martina McBride has that, plus.

Reading her CV, it’s easy to see why she is the star she is – she has sales into the stratosphere (believed to exceed 16 million); she’s climbed the Billboard chart with an envied 22 Top-10 hits; and along the way, she’s delivered music across 10 albums.

She’s reliable and fan-friendly. You only have to watch her do “A Broken Wing” to see, more importantly hear, the impact she has. When the last song note hits the back stalls, they’re up, clapping, cheering, placards waving, and like the roar of a tsunami, the fans erupt with unified approval. It’s a moving moment on the DVD, one that shows the power of McBride’s voice, but also shows how the audience value the talent of their musical hero.

“That may be the biggest noise I’ve ever heard,” tells the clearly moved icon; “Stop it…you’ll make me cry.” The fear of tears hold no sway – the audience, again, respond the only way they know, with more and more applause.

Just like that lucky audience, there is much to applaud here. McBride uses her distinctive voice and stage presence to fine tune a chart-topping set list. There’s “When God-Fearin’ Women Get The Blues”, the raunchy “Wild Angels”, there’s a great version of the Lynn Anderson crossover hit “(I Never Promised You A) Rose Garden”, a countrified “Hit Me With Your Best Shot” and there’s the career-making tale of spousal abuse played out on “Independence Day, with the uplifting “Over The Rainbow as the encore finale.

Along the way we’re front row to hits like “My Baby Loves Me”, “Happy Girl”, and crowd favorite, the made-for-concert-participation “This One’s For The Girls, among many others.
​
Martina McBride Live In Concert. It’s out now. The wait has been worth it.