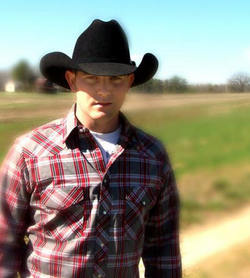 Review By: George Peden, Staff Journalist
9/23/08
You have to start somewhere. George Strait did it with Strait Country. Alan Jackson stoked the flame with Here In The Real World, while a shy wannabee from Oklahoma paved a road to fame and fortune by sticking to his family given moniker, Garth Brooks.It’s what every artist both loves and fears: the first album. It’s the beginning of a career in music, or it can become the sad legacy to a dream lost.
Meet Michael Thomas.
He’s just starting to gain some public attention, courtesy of his mini album, Bonafide Country Boy.Here at CSO Central, we think you, like us, will be impressed.
Hailing from Winston-Salem, North Carolina, this daytime construction worker and nighttime country crooner is, as his album suggests, both bonafide and country.
He gained his stage confidence while playing in the family band, The Cannonball Express. It was there his love of country music grew. That early induction has led to writing and singing and comes backed up with a multi-talent for playing bass, guitar and, as he did in the family band, drums.
But the real talent shows and shines when Thomas sings. He sings country. He sings clear and clean. He drawls. He hits the bullseye with a voice that just fits. He has feel, and he has passion. He has the makings of taking his chosen career to a wider audience. Like all the mentioned music icons above, you have to start somewhere. This is a great beginning.
With a self-funded and family supported venture to Nashville in 2007, Thomas has, with the help of a small and selected network, delivered with an album that is lacking in fillers, but is complete with five fan and radio-friendly tunes.
Straight out of the chute is the opening cut and title track. With a tight and driven backing of drums, fiddle, steel and guitar, Thomas lets loose with one of three self-penned cuts on his independent release. The song is a hat tilt to the fun times had when you’re living the full life of belts and buckles, tractor pulls, cold beers and Friday night by the lake …” You can tell who we are by the sound of our voice, we was raised this way but it’s still our choice – we’re redneck bonafide country boys.”
A slower pace comes fuelled with mellow tones, perfect for Thomas’ rich vocals, as he shares an often forgotten truth on “Speed of Life”. Life doesn’t have to be lived in fast forward; in fact, when we take our time and engage fully, we often see, hear and feel more than our hurried neighbors do.
“Nobody Else But You” is a fiddle-touched ballad. Thomas pines, whines and laments, beautifully, while telling what every man has told someone special at some special time. For guys lost in romance, looking for an “aw shucks” sentiment to share, this is your song.
“Cowboy Way” confirms for a bonafide country boy, love’s softer moments can be harder than a rodeo fall or more lasting than the offered blisters of a rough saddle. Thomas leads with his cowboy heart, painted for all to see on his cowboy shirtsleeve, as he decides between the lure of an 8-second ride or a made home. It’s a storyline like George Strait’s “I Can Still Make Cheyenne”, with Thomas wrestling between the realties of shattered bones or a broken home.
The album ends on “Drowning In Her Memories”. Easy and melodic, the “leavin’ note on the nightstand” tale of a toppled romance is a shot glass and late night lament for pondering males. Thomas doesn’t overplay the emotion here. He sings with knowing conviction: It’s a talent well evident in his finely created tunes and a made-for country voice.
Michael Thomas doesn’t have a label. He doesn’t have a record deal …yet. But, you have to start somewhere, just like George, Alan and Garth.
Michael Thomas has begun.