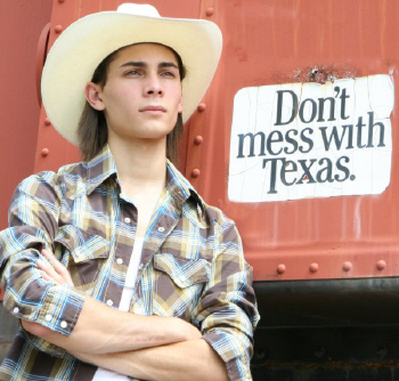 I recently went on a trip to Clarksville, Tennessee to welcome a close family friend home from Iraq. While there, unfortunately, I missed my chance to meet a young man who I have no doubt will be one of Nashville’s newest country stars. Now I am sincerely hoping I get another chance.

Kameron Ross, who turned seventeen the same week as his first trip to Music City, has a voice that is certain to conquer the country music world and turn it upside down. I couldn’t have been happier to receive his demo CD for review, honestly, I felt lucky! So much so that when I opened the envelope and saw who it was, I immediately started doing the “happy dance”. I had already heard the few tunes he had on his myspace site and I was eager to hear more.

Ross’s demo has three titles and I found it impossible to pick a favorite. “Bag of Chips” shows off his ability to bring his outstanding vocals and country style to the table, and will make anyone stop in their tracks to listen.

When he sings “It’s A Man Thing” there is so much power in his voice you can’t help but picture a big burly cowboy. But when you see pictures of Ross, although he is very tall (over six foot); his thin frame, beardless face and smooth features reflect his youth and cause you to wonder ‘where is he hiding this huge voice’? I found myself comparing him to Lorrie Morgan because of his strong vocal capabilities; he can reach deep into your being and work his way so effortlessly through all of your emotions.

The final song “Win some, Lose Some, Lonesome” is sung with such feeling and emotion that it makes you wonder just how many times, in only sixteen years, this young man could have had his heart broken. I look forward to the release of a full album in the future because after hearing these three songs, the only thing I want to hear from Ross is ‘more’.

Watch out Nashville, I predict that Kameron Ross will rock the country music world.

What the fans are saying:

Awesome, this guy is going places. Kameron's voice is powerful yet smooth where it counts in all the right places.
~ Mike in Houston, Texas

First of all let me say I agree with Amy, "Kameron Ross will rock the country music world." This young man has such a presence about him that he is hard to resist just wanting to hug him to pieces! Sorry Kam, just had to say that! Oh, I guess you want to know about his talent, well that is unbelievable. Kameron has a voice that will blow you away, when you look at this tall, slender framed kiddo you can never imagine what he can belt out of those pipes when gets started! I don't think he is old enough to know what all the "It's A Man Thing" is about when he sings about it in his song written by Kelly Lang for him, but he can sure get the point across to you if you listen to the words from his wonderful voice!
I am certainly convinced Kameron is here to stay for long time to come.
~ Barb from TN

I am very impressed with this young man' voice, it is a very mature voice for someone so young. I especially enjoyed "Win some, Lose some, Lonesome"
~ Corey from Tyler, Texas

The first time I heard Kameron Ross was at a contest several months ago. The room seemed to be full of chatter even as contestants were singing. BUT... when Kameron began singing, heads turned and jaws dropped! Everyone in the room had their eyes focused on the 6' slender, 16 year old with a voice that you would've expected out of a 30 year old, seasoned singer. I actually got GOOSEBUMPS! Since, that competition, I've overheard other onlookers say the same thing. My opinion is, this young man is of the same caliber as Alan Jackson and George Strait. He has a unique twist in his voice that you only hear come along every great once in a while. I'm not his manager or promoter, but I encourage anyone that would like to hear this AWESOME voice in action, contact his manager. Talk to your local clubs, festivals, large functions and get him in your area! I do, every chance I get! Visit his website. Call your radio stations and tell them you want to hear him. I promise, you'll enjoy your efforts!
~ Sincerely, Dana from East Texas

This is an amazing young singer. I wish for all his dreams to come true.
~ Bridgette - Houston, TX

My wife and I attended the Colgate Country Showdown in Jacksonville, TX back in June of this year to support a young lady participating in the contest. Before the contest began, everyone was asked to perform a brief section of their song for a sound check. Several good singers did their sound check on stage in this building packed with approximately 150 people who were all talking and making noise. My wife and I were facing away from the stage talking to her cousin when the next singer started his sound check. We immediately turned to see who it was as did everyone in the building. You could have heard a pin drop as everyone listened to the amazing voice coming from this young and lanky kid. We could hardly wait for his performance in the contest. He was introduced as Kameron Ross, 16 years old, from Houston, TX. None of us could believe it. His song was "Drinkin Bone". Can you imagine hearing this live? He was awesome. Since he is from Houston and we are too, originally, my wife introduced herself to him, his mom and sister. We have since become great friends. Kameron has the awestruck affect on everyone at each performance. From the 4th of July Blowout at our home on Lake Palestine in front of 80+ people to his performances at the East Texas Jamboree in Broaddus, TX in front of 450+ where he performed as Hank Williams, Sr. in their Legends Show and the VFW Hall in Lindale, TX (Home of Miranda Lambert and Casey Rivers), you realize the talent that this young man has. Kameron WILL go far. Good luck Kowboy and keep 'em comin'.
~ Bob, at Chandler (Lake Palestine), TX.

I want to hear more of Kameron Ross. What a voice!! Sing your heart out Kameron.
~ Kathleen (Ms Arkansas)

Kameron's rich deep voice amazes me every time I hear it - this artist is on his way to the top of the charts!
~ Patricia B.

After spending quite a bit of time with Kameron Ross while he was in Nashville, I found him to be a truly gifted young man. He is so talented, his album is fantastic! He is sure to be headed for Stardom!
~ Barb - TN

I am a concert photographer and I have heard a LOT of good music. I predict that one day Kameron Ross' name will be spoken with the same reverence as Ray Price, George Strait, Alan Jackson and Brad Paisley. Kameron's voice and manner carry the same solidity and calm - no worries - ambience as these legends. Yes, Brad is still a legend in the making, but then, so is Kam.
~ Tammy - Alvin, Texas

One of the most powerful voices for his age, I have ever been privileged to hear.
I am old enough to remember Brenda Lee as a teenager and Kameron stands in her league when it comes to his powerful new sound. In person, Kameron is a great guy and I predict a great singing career coming his way.
He deserves all of the breaks..
~ J.Pate, Houston, Tx.

I love this album, Kameron is truly talented, and hope to hear more from him.
~ Staci

I find this young man is a rising star in the Nashville Country music world. He has a strong voice for his age. I normally don't listen to country music, but with this young rising star, I am listening more. May your future be very bright.
~ Lynn