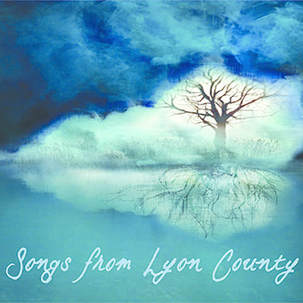 It’s no secret I love bluegrass/country music, and I must admit I got excited when Songs from Lyon County was laid on my desk. Without hesitation I popped it my CD player. The album consists of nine songs that are superb from the start to finish.

I can remember a time at my grandmother’s house when all I heard was the sweet sound of mandolins, banjos, fiddles, guitars while growing up in Virginia. She would put a record on her old record player or turn the dial on the radio to bluegrass and would be in the kitchen cooking up something special, usually it would be homemade chocolate syrup and buttered toast. Yummy!

The album has such a charm and uniqueness, the grounded roots of Kentucky shine through on this album. All the songs were written by Dennis Duff and he has six guest artists that include Paul Brewster (Ricky Skaggs band), Josh Shilling (Mountain Heart), Bradley Walker (Gaither Music), Holly Pitney (Mo Pitney band), and Darin and Brooke Aldridge (Mountain Home Music).
​
In the bio Duff says “These songs were written from the point of view of the people who lived them. They are not documentaries of history but instead more like diary entries of a generation past. Some may make you smile, some may make your cry, but I hope they all connect you to the past and take you on a musical journey that you enjoy.”

This album has done just that for me, the sound of bluegrass will forever echo through my veins.
​
​