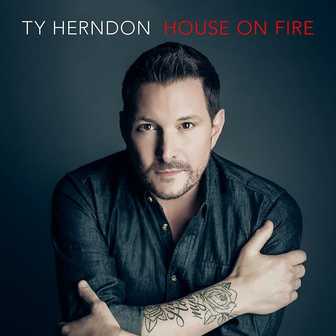 Album Review by: Cheryl Harvey Hill, Sr. Staff Journalist
​
House on Fire is Ty Herndon’s eighth career studio album. As I listened to the album for the first time, it was like meeting up with an old friend and listening as he told me about his life experiences. He always was able to convey a lot of feeling with his compelling lyrics and charismatic voice. As I listened to his new album, I was reminded of another time, in another place.

It was during an interview back in 2004, I asked him if he could change anything in the music business, what would it be? His instantaneous reply was, "That everyone would be heard." The compassion in his voice, and the determination on his face as he responded, lead me to believe he wasn't only talking about music. He was a man on a mission, one soulful voice, hoping to make a difference in the world and considering his previous tenacity and resolve, I predicted he would succeed. Judging by the things we know about him now, and after listening to his newest album, I'm thinking I may have missed my calling as a pschyic.

The album, co-produced by Herndon and Erik Halbig, with Drew Davis as co-producer on six of the songs, gives a voice to Herndon's wish that "everyone would be heard". He takes full advantage of his powerful and marvelous voice to deliver lyrics that are destined to be meaningful to everyone who hears them. How is he able to deliver so much reality and passion via a song? The answer is simple, “If I haven’t lived it, I haven’t sung it," he says.

Herndon addresses that feeling of brokenness on the title track, House on Fire, his first release since publicly coming out in late 2014. "I still replay those words / Only ten years old and hate is what I heard from that loving church / and there's no salvation on the road you're taking / and a kid like you ain't worth saving," he sings. “It took me two days to write that song because I kept getting so emotional that I had to walk out of the room,” he recalls. “Halfway through the process, my co-writers were feeling it too. I knew at that moment that I was not only writing my story, but I was writing a lot of people’s stories with these songs. All the pressure I’d felt just flew out the window at that point because I knew that my truth was a lot of people’s’ truth.”

Another stand out track for me is "Fighter".

Between 1995 and 2002, Herndon charted seventeen singles, including his three No.1s and numerous top ten hits. He topped the charts again in 1996 with the single “Living in a Moment” and again in 1998 with “It Must Be Love.” In 2010, Herndon released the album, Journey On. It was his first venture into songwriting and not only did he receive a lot of critical acclaim, he earned a Grammy nomination and his first Dove award.

Longtime fans will love the new album. His dramatic vocals and heartfelt lyrics are what took his debut single, "What Mattered Most," to number one and that same genuine passion for life and love is discernible on each of the twelve tracks. He told Rolling Stone, "I'm a country artist. And I'm a country artist who happens to be gay and some days I feel like I'm walking very thin line with it," he says. "But I'm just trying to stay true to who I am and the music I'm making."

Well Mr. Herndon, I was smitten by your incredible voice back in 1996 and I still am. I think I'm like the majority of your fans. We get it. We get you. And we are comforted by your voice, your lyrics, your music, your songs, because you are singing our lives.

"I want anybody, from any walk of life, to hear this record and put their own stories into it while still hearing mine.” Ty Herndon