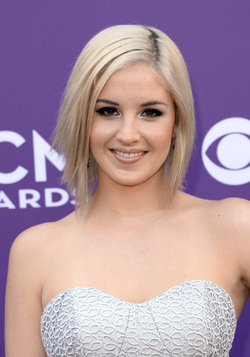 Not even the rain stopped Nashville's talented and beautiful Maggie Rose from joining forces with the local radio station 97.5 WPCV for their St. Judes Partners In Hope celebration at Music Ranch in Lakeland, Florida.

I had the opportunity to catch up with Rose before the show to chat a bit about her new album, Cut To Impress. NutsAboutCountry.com was one of the first to review this awesome album, in fact, I'm proud to say we were one of the very first to feature this talented artist. The first song released from the album was the firey, up-tempo tune with the clever lyrics, "I Ain't Your Mama". Our entire Florida crew was hooked on it the first time we heard it and judging by the feedback from our readers, we weren't the only ones. The video is brilliantly produced and Rose's performance, acting and singing, is perfection.

Although I had planned on asking her a few questions, after just a few moments with the personable Rose, I made the decision to turn over the reins to her and let her talk about whatever she wanted. "Anything I want", she asked? "Yep", I responded, "anything you want." "Well", she replied with that mega watt smile of hers, "I want to talk about my live show. I want everyone to know how excited I am about my music, our song choices, and my band. I selected my band members myself, I wanted not only a band that could play and sing, but one that could harmonize well with me."

"I want to reach people with my music through my live performances. I grew up in Potomac,Maryland and got my start in music with a cover band called the B Street band, not Beat Street but B Street, a Bruce Springsteen cover band. I learned a lot about harmonizing and, with my new band, I know I have found the perfect fit." She then introduced me to each member of her band and, as she did, she told me how she met them. Before we knew it, it was time for the show to start so I went and took my seat inside the venue.

Prior to the start of her concert, the personable and sincere Rose took the stage to thank the country music fans and St. Jude supporters, since this is a cause she very much believes in and supports whole heartedly.

Ironically, she kicked off her show with the final track from her new album, the wildly up-tempo tune "Goodbye Monday".  This song pretty much guarantees to fire up an audience and that is exactly what happened. First song, first standing o!

She easily captivated the audience with her alluringly beautiful voice and magnetic personality. She and her band easily held our attention all night with their amazing harmonizing and perfect pitches on "Fall Madly In Love With You", "I Know Better Now" "Preacher's Daughter", and one of my favorites, "Put Yourself In My Blues".

She sang her new hit single "Better" before kicking it up a notch with the heal stomping, hand clapping "Mostly Bad". Then taking a break from her album cuts, she treated us to her rendition of Linda Ronstat's hit song "You're No Good" before bringing the house down with her hit song "I Ain'tYour Mamma".

Rose and her band have already developed a reputation of being a great live band and now I can vouch for their perfect harmony. She says her goal is to reach our hearts, souls, and minds, with her live performances, and the stories she tells through her music. I would have to say, for me and a few hundred folks at Music Ranch, I'm quite confident her goal was definitely reached. Although the lights weren't very bright, the star on stage sure was!

I would like to extend my heartfelt gratitude to Rose and her band members Sara Tomek on drums, Natalie Murphy on fiddle, Raquel Wynn on base guitar Jason Waters on the Cajon box drum and Jason Graumlich, on lead and steel guitar.You all are magnificent!

Cut To Impress album review
I Ain't Your Mama
Maggierosemusic.com