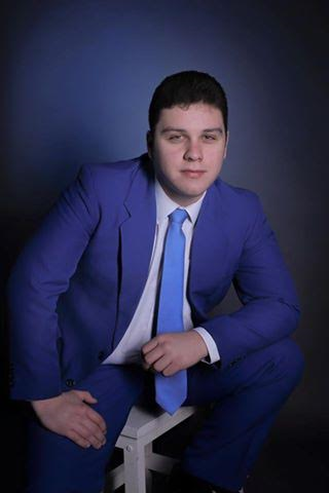 There’s no doubting Brandon McPhee’s pulling power. He’s youthful and clean-cut. For his album cover he even has a suit and tie. This artist, and that’s what he is, has his sights set on appealing to a specific mass of music lovers. And there’s nothing wrong with that, given the spate of hat, beer and truck acts that slam dunk the charts and disappear. McPhee, given his presence on YouTube, is a career-minded talent with big picture potential.

The thought of a younger Daniel O'Donnell nears the mark and certainly targets the audience.

Now with his first country outing, The Country Side, the 13 tracks are sure to bring this Scottish-born singer and accordionist to wider interest. Out on Pan Records, the album shows a keen mix of country favourites and loved standards.

Brandon’s grandfather started teaching him the accordion at ten; by eleven the inspired boy had recorded his first album. Now, with a catalogue of recorded music, well embraced by the Scottish public and resulting in several popular music nominations, it’s time to boot scoot.

With a hint of the homeland accent, which is pleasing, the album opens with “Let Me Be There”.  The Olivia Newton John classic will have baby boomers primed. First recorded in 1973, the track signposts the mood and tempo to follow.

McPhee’s voice is melodic and tuned. The young Scot can handle a tune, and handle it well. Tracks like “Under the Hood”, an album cut by Billy Ray Cyrus, the anthem from big hair days “It’s A Heartache”, and the modern tapper from Darius Rucker, “Wagon Wheel” along with the Haggard classic “Branded Man”, all showcase a talent whose jumped the geographical fence and stuck his toe in the country pond.

Your Christmas stocking stuffer for older family members is within reach, grab it.